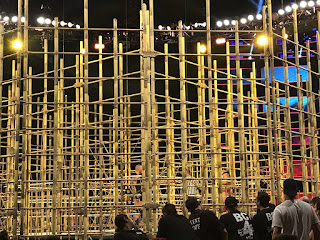 Calling this show a hot mess would drastically overestimate the temperature of the mess.

Oh, I guess these two are feuding now or something Dillinger "pays his dues" or something. Sigh. English won with a finisher that doesn't even have a name. (0/1)

Fantastic match. I really had no idea which way it was going to go. I still don't know why this maqtch was here and not at Summerslam, but the New Day are now three time champs, so time to update the chant. (0/2)

Well, that was disappointing on pretty much every level. It was sloppy, the two had no chemistry, there were two lengthy bear hug spots (my least favorite of all the submission holds), and it ended with Corbin getting disqualified for kicking Nakamura in the balls. At least I got the prediction right. (1/3)

Another mess, because the weak links in the match were Tamina and Lana, and most of the match focused on Tamina and Lana. Once things were down to Charlotte and Natalya, things picked up a bit, but it still wasn't great, and Natalya won with a weird "throw Charlotte into the bottom turnbuckle" thing that didn't feel like a finish. (1/4)

What is happening? This was fine as it went. I mean, these are two talented guys, but none of this match was particularly surprising until the weird, incomprehensible ending that saw Ownes pinning Styles unconvincingly. I can only assume this continues to Summerslam? (1/5)

Jesus, that was about three times as long as it needed to be. ll the plodding pace of an On A Pole match for the first... 40%? And then a slog up and down the entrance ramp for what seemed like an eternity. The finish was telegraphed a mile away, too. Hell, the crowd wasn't even super into it. But Cena won. (2/6)

I was right about being wrong. This was just two guys killing time before the main event. (2/7)

It sucked balls from start to finish with the exception of a couple of spots, and it took four dudes (Mahal, two Singhs, and a surprise return by Great Khali), but Randy Orton lost, so I'm happy. NOt as happy as if the show hadn't sucked, but happy nonetheless.(3/8)