Some Fun TV Pops AND THE BEST POPS IN THE UNIVERSE

So we're going through one of those times again where a bunch of Pops I heard about the last time I was looking around at Pop news are actually out. So I got the full set of Preacher ones, not because they're the greatest Pops, but because I loved Preacher so much. And they're fine. Plus technically Jesse and Tulip also count as MCU pops via actor connections. Of course, with every incarnation, Arseface just keeps getting cuter, which doesn't seem right.


On the left, of course, is The Atom from Legen... ARROW. HE'S FROM ARROW. HE'S A SUPERSCIENTIST WITH A NEAT SUIT AND HAS SEX WITH FELICITY AND NONE OF THAT TIME TRAVEL STUFF HAPPENED. And he didn't fall in love with Constant Former Barista Hawkgirl. Nope. Just Ray Palmer, The Atom, Arrow character. And I threw the box out so you can't prove otherwise.

Oh, and these I preordered. They came today. And they are the greatest Pops Funko has ever made.

AAAWWWWWWW, TOY SHELF! DON'T YOU DARE BE SOUR! CLAP FOR A TINY PLASTIC VERSION OF YOUR WORLD FAMOUS TWO TIME CHAMPS AND FEEEEEEEL THE POOOOOWAAAAAAA! 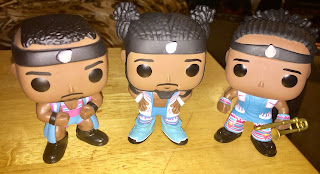 I love these so much. All the details So uch love. Xavier Woods even has the genie boots: 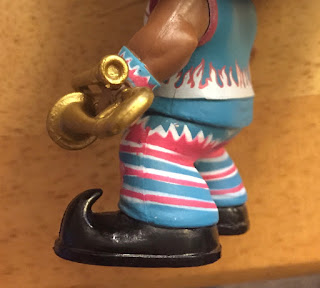 I man, come the fuck on. They're a Toys R Us exclusive but they're priced normally, which was nice.

I have two more on their way, thematically related to a recent post, but they don't have trombones.
Posted by Bryan Lambert at 6:56:00 PM