Now, I'll admit the less than epic ending to Season 2 led to a less than epic start to Season 3. Dario Cueto is released from prison thanks to friends in high places. He's handed his personal effects, including "Giant Key", which I called right before it happened but was still obvious. He then thanks his Big Boss In The Limo from Season 2, and we hear an otherworldly voice and see a hand in a metal, almost Shreddery gauntlet: 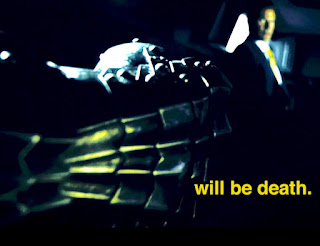 And then it's back to the Temple, where Dario unveils DARIO'S DIAL OF DOOM. He spins the wheel, and whoever's name comes up gets a title match against Matanza. First up, Son of Havoc! And that's our opening match! It's a good choice, because it reinforces Matanza as a heel, and ties into the Ultima Lucha story from last season. Son of Havoc loses, of course, but just having a competitive match against the champ really does elevate him as a talent. They say that a lot in wrestling, and it rarely works, but here it does. Son of Havoc has a new move that has to be seen to be believed. 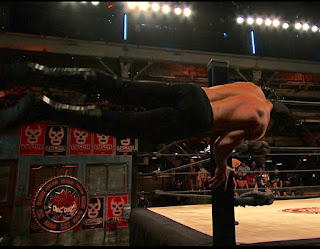 Worldwide Underground are in Cueto's office. Mundo wants a title shot! He doesn't get it. He tells Cueto how they took out Angelico (apparently injured again during the tapings). He still doesn't get a title shot. He asks for a Gift of the Gods title match against Sexy Star. He doesn't get that either. Taya gets it, tonight! And not because she's a girl, because she's the only WWU member who didn't lose at Ultima Lucha. That's why I love this show.

Ivelisse wants a win at Ultima Lucha, and she wants Catrina, who is the reason she's lost twice at Ultima Lucha. The challenge is accepted... for Ultima Lucha Tres?! This is a 40 week season, so it's interesting to get this match set up this far in advance. Not sure what they're going to do with it. Also, Catrina still teleports but has a new outfit.

Sexy Star vs. Taya for GIft of the Gods is next. It's a solid, if unspectacular match. Post-match, WWU comes down for the beatdown, but are driven off by the Trios Champs, the Superfriends (Drago/Aerostar/Fenix).

Marty The Moth is the next person to come to Dario Cueto's office to stake his claim and plead his case. Dario, however, feels there is unfinished business between Marty and Killshot from last season, and that business will be finished in a WEAPONS OF MASS DESTRUCTION MATCH. Will this be, in any practical sense, different from a Death Match or a Falls Count Anywhere Match or a Boyle Heights Bar Fight, but who cares?

And finally, our main event. Rey Mysterio, coming out to the ring with the original Rey Mysterio Sr. mask over hsi own mask, and Pentagon Dark. This is just a straight up clash of fucking titans and a dream match to open the season, and I'm fine with that. The match is fantastic, just top of the line Lucha Underground action. Pentagon, of course, can't help but hassle Vampiro at the announcer's table. This causes Vampiro to walk away, but also lets Mysterio recover, hit the 619, and a second rope Mexican Destroyer (!) for the win. Pentagon goes for the post-match attack and arm-break on Mysterio, finally getting the crowd to treat him like a heel, but the save is made by Dragon Azteca Jr., which is an excellent choice, as both Mysterio's student and Pentagon's victim.

Where did Vampiro go? He went to the locker room, where, after the credits, Prince Puma is sulking over his loss to Mysterio. They have a chat, and Vampiro tells Puma he hasn't been the same since Mil Muertes took his title and his mentor (Konnan) from him back in Season 1. He tells Puma that his road to redemption goes straight through Mil. It's shockingly good acting from Vampiro, the kind of thing I absolutely would not have thought possible partway through Seson 1. Lucha Underground is back, baby.
Posted by Bryan Lambert at 6:29:00 AM