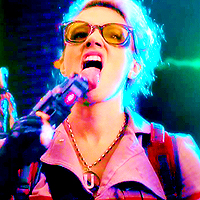 Ghostbusters is a very easy movie to review when you review it entirely on it's own merits.

I mean, it's a big-budget Hollywood blockbuster special effects comedy. So at the end of the day, it needs to look good, it needs to make a modicum of narrative sense, and it needs to be funny. And Ghostbusters succeeds on all three counts - most importantly, the third.

This is a mkovie that's chock-full of solidly-crafted jokes and funny characters. There's very little of the comedy dead air you see in a.lot of mainstream comedies - Feig and company keep things coming at a steady clip and work in the plot and characterizations around and during them. The tone is set right off the bat, with Silicon Valley's Zach Woods as a tour guide dropping a couple of bombs within the first two minutes.

You've probably heard about Kate McKinnon as Jillian Holtzmann by now, because she steals the fucking movie, and that's NOT an easy task. It's the least stereotypical and least predictable performance of all four Ghostbusters, and it's a joy to watch. Not to diminish Kristen Wiig, Melissa McCarthy, and Leslie Jones, whose character is thankfully a bit more than the trailers would have you think. And goddamn, Chris Hemsworth as Kevin.

The action is solid. The big set piece near the end of the movie sees all four Ghostbusters actually fucking busting some ghosts. Not chasing, not confining, not drapping, just straight up BUSTING. Blowing them up with a wide variety of proton-based weaponry from the hyperactive mind of engineer Holtzzmann.

Of course, no movie's perfect. And this one's npt just a big-budget comedy, it's a remake/reboot of a known and beloved franchise. Which means nods, winks, blatant references, and cameos. More than it strictly needed, frankly. I get why they're there, and I get the difficult math of balancing fan service and striking out on your own. But Dan Aykroyd's cameo stopped the movie dead for no real payoff, and the Stay Puft cameo was really too long to be called a cameo and just felt shoehorned in. Bill Murray's extended turn was well-done, Annie Potts got a proper cameo, the firehouse was handled OK, and Ernie Hudson and Sigourney Weaver's epilogue bits are predictable and fucking awesome, respectively.

The plot is no great shakes, but neither was the original's, so I won't hold that against it.

And no, this movie didn't ruin my childhood. I was never much of a Ghostbusters guy to begin with. I mean, I liked it, and still do, but the new one really just brings modern pacing and comedy sensibilities to the idea behind the original, and as reasons for reboots go, there are many worse. I mean I just saw the trailer for the new Ben Hur, and you should be WAY more pissed about that than Ghostbusters.
Posted by Bryan Lambert at 8:25:00 PM

Email ThisBlogThis!Share to TwitterShare to FacebookShare to Pinterest
Labels: Movies