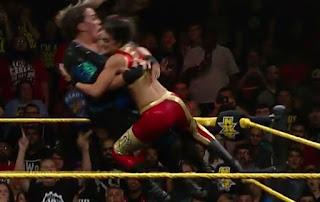 Big-ass week for the WWE. A big match on Raw, the announcement of general managers, the Draft on the first regular live Smackdown on Tuesday, more Cruiserweight Classic on Wednesday, and Battleground on Sunday.

Also, on the list of things I didn't know I needed until I got them, Xavier Woods listing off Pokemon while the crowd chimes in "HOW YOU DOIN'" after each one? Hells yeah.

A little odd that they've basically abandoned the serious side of the New Day / Wyatt feud. Last week's Creepycam footage of the two teams fighting in the swamp was neat, but if I had a dime for all the consequences from that evident on tonight's show, I think we all know how many dimes I'd have. All those teams and The Clerb were in a big twelve-man tag that ended with Cena, who played the role of Clueless Killjoy Dad during the opening promo, getting accdentaly clocked by Enzo. Enzo then ate a Styles Clash for the pin. Which means G-ena is winning at Battleground.

Apparently the Lucha Dragons have split up, which is fine. I hope Sin Cara gets custody of the theme and the chant and the jobbing (like he jobbed Monday to Baron Corbin).

And then we had the weird double-pin non-finish to the Rollins-Ambrose main event, which seemed to run longer than they intended because it got "resolved" on the WWE Network afterwards.

SMACKDOWN LIVE AND THE DRAFT:

Not much to say about the matches on Smackdown, except Ambrose pinned Rollins clean, which is a bit of a wurprise, and Xavier Woods remembered he was scared of Bray Wyatt.

Overall, the draft was WAY kinder to Raw than Smackdown. The SD roster is heavily loaded with people I'm bored with. John Cena. Randy Orton. The Miz. Baron Corbin. Del Rio. The Usos. Kane. The Ascension. Eva Fucking Marie. It's OK that Ziggler and Bray Wyatt are there, but they're both damaged goods. The only excitement comes from American Alpha and Alexa Bliss joining Smackdown from NXT, but who are they gonna wrestle? Smackdown did get Becky Lynch and the Vaudevillains, and maybe Breezango can do more. But what the hell are Ambrose and Cena going to be doing? They drafted Kalisto and the new Cruiserweight division's gonna be on Raw. SD has Apollo Crews, drafted almost as an afterthought.

Raw got all the cool people. Zayn. Owens. Cesaro. The finally called-up Finn Balor. The returning from injury and clear first Cruiserweight Champion, Neville. New Day. Charlotte. Sasha. Dana. Rusev. Gallows and Anderson. Brock Lesnar and his stash of fertility drugs. Enzo and Cass. Nia Jax from NXT. And probably Bayley after Sunday. Sure, the picks they made off the air were weaksauce (Mark Henry still hasn't retired? The Dudleys? Golden Truth?) but it really seems like Smackdown got the shaft. Raw gets Finn Balor and Sasha Banks, Smackdown gets to run the Hype Bros past an uncaring world.

The classic wrestling principle of "go out on your backs" was in full effect the rest of the night. American Alpha threw every last bit of their very impressive offense against the Authors of Pain, but to very little effect. The Authors were staggered at times, but still won in a dominating fashion. It'll be interesting to see what they do with these guys, since their current gimmick is that nobody knows their names and their manager doesn't say anything either. Not sure how effective that can be when you're not Prince Puma.

Bayley beat Nia Jax in a decent match telegraphed by Jax's drafting. I still want Bayley to debut at Battleground, but wouldn't mind her doing double duty and chasing the title on NXT since the draft eviscerated the NXT women's division (Jax, Alexa Bliss, and Charlotte). Before last night, I'd have said Nia Jax was the least ready of all the people called up to the main roster in the draft, but after that match with Bayley, she's pulled ahead of Mojo Rawley. And when the other people are Balor, Alpha, and Alexa Bliss, that's no insult. Jax looked better than ever last night, and beter than all the pre-Paige talent on the main roster.

Tajiri somewhat surprisingly beat Australian Damian Slater. At 46, Tajiri can still go, but that basically means wrestling the same matches he wrestled on Smackdown in the 2000's. This was fine, but nothing extraordinary.

TJ Perkins, who I've seen in the indies, wrestled Da Mack, who's not Lucha Underground's The Mack, but is instead a German Michael Jackson impersonator. Fun match, with TJ Perkins winning with an impressive mix of acrobatics and submissions that reminds me of Chad Gable. I'd love to see Perkins in WWE.

Lince Dorado defeated Mustafa Ali in what for the CWC was an unbelievable exhibition of never-before-seen offense, and what for Lucha Underground would be a solid outing. Ali busted out the top rope Spanish Fly we've seen many times from Johnny Mundo, and Dorado won with a top rope Shooting Star Press. You know, they're stressing the international nature of this tournament, but the only people advancing are Japanese cruisers, luchadors, and American indie guys. Sure, Perkins is of Filipino descent, but come on.

In the main event, Akira Tozawa beat Kenneth Johnson in a triumph of a Japanese bruiser over an American indie guy, heh.  This was mostly mat and counter wrestling. Johnson was good but kind of sloppy and he didn't seem to have much offense. He hung with Tozawa well, though, until Tozawa hit him with a pair of first-rate German suplexes for the win.

Another solid episode, but much like the first week, the matches are just a hair shy of clicking. Individual personalities are coming through, which is I suppose mostly the point, but the matches themselves aren't quite where they coiuld be.