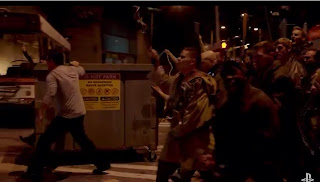 Finally got back to knocking out some Powers, and Preacher enters the home stretch. With luck I'll be able to finish both before the CW shows come back, but not so much before that I find myself watching Supergirl.

That was not at all how I expected this episode to go. First the Eugene fakeout, which totally fooled me and had me wondering why the previews had Jesse trying to get someone out of hell. Then the whole episode ended up being about the picnic/siege of the church, with the bit about the angels, Genesis, and going to Hell almost an afterthought. Jesse gives up Genesis, Genesis breaks free of its coffee can and goes back to Jesse, angels fuck right off.

We get Donny's moment, where he bursts his own eardrums with his gun in order to sneak up on and capture Jesse. We get almost no Tulip and even less Cassidy, but what we do get hits like a ton of bricks when it lands. We get some Odin backstory and the revelation that the God he serves is the God of Meat, which was fun. And we get one of the most Ennisy things in the show that's not from the actual Ennis comic in a long time - a QM&P henchman charging the church in a Civil War uniform, charging the church shouting FOOD COURT FOOD COURT (promised by Quincannon as part of the new factory that will replace the church).

And, most importantly, we get the first sign of Jesse's ultimate quest - to call God out on his abandonment of his creation. Two episodes left in what is clearly turning out to be a season-long pilot / origin story for the REAL Preacher series that'll start next season.

Civil unrest is hard. Especially on a budget. The City going insane over Retro Girl's death and the power vacuum it creats is represented by bout 100 extras yelling at each other with things Vaguely On Fire in the background and seems to be confined to a single city block. Understandable under the circumstances, but this made Arrow's attempts at city-wide unrest look like the Battle of Helm's Deep by comparison.

The unrest is ended when Michael Madsen's shouldn't-be-wearing-spandex Super Shock tells everyone to be nice and go home or he'll kick their ass, so it's a good thing the unrest was geographically limited to the sound of his voice that one time he landed.

Anyway, Pilgrim's shithead partner starts acting like less of a complete shithead, and saves Pilgrim's life, and then they have post-traumatic sex in their car. Which, as complications go, is only mildly interesting.

While all the Hell Night stuff is going on, Walker continues to invetigate Retro Girl's death, using harsh interrogation techniques with Triphammer and Soon To Be New Triphammer, which leads to a head exploding, and they eventually track his dead partner's dead son's girlfriend slash co-conspirator to an abandoned building, which is then dropped on them by a Whimsically Evil mystery Power. I get what they were going for there, with the shocking jauntiness intended to be creepy, but it only sort of worked.

Relationships are hard. Especially when your FBI boss used to be a super-powered cat woman (not Catwoman) criminal who got "rehabilitated" after you captured her and likes her sex REALLY rough. Tricia Helfer trades in her glowing sex spine for a tail and contact lenses as the episode reveals that FBI Agent Angela Lang is also (or was also) the Power known as Lynx.

Walker hooks up with his old flame to keep her distracted while Pilgrim and her new car-partner steal data off of Lange's FBI laptop with a Gizmo. Basically, a bunch of light bullshit about gravity waves and the Black Swan (ugh) lead them to the realization that the mystery Power who dropped the building on Walker and the girl is actually a gravity-manipulating government recruit named Heavy, continuing the Powers tradition of awful superhero names because all the good ones have already been trademarked.

This whole thing plays out over a bunch of flashbacks to establish Walker's relationship with Lange, first as Diamond, then shortly after losing his powers.

There's another subplot, starting up briefly in the previous episode, about the Asshole Superhero Agency's plans to recruit the new Retro Girl, led by the increasingly unstable Craig, and the Super-Corrupt News Lady to also track down the new Retro Girl. This all culminates int he diner where Calisto has taken a secret identity job as a waitress. Craig tries to woo her, the news lady confronts her about her beating the shit out of her father, and she flies off through the roof in a public relations disaster. And then Wil Wheaton shows up as a creepy guy at the agency who does focus groups with kids and who knows where that's going.

All of this is reasonably compelling stuff, competently done, but with occasional moments where the budget or the heavy-handed melodrama shows through the cracks in the facade.  As was true last season, the show's not quite up ot the task of telling the story it wants to tell, and like the first season, it's at its best when it's dealing with the story and the events on a smaller and more personal level.