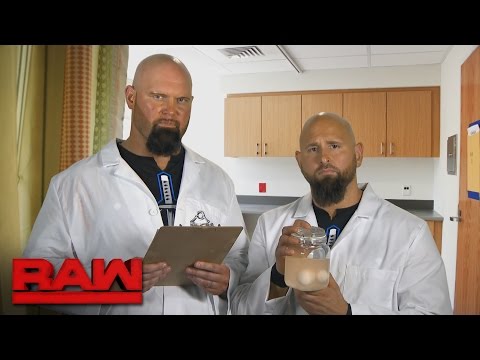 Right - in the interest of timeliness, I'll be splitting the WWW into days - Raw, Smackdown, and NXT/CWC. We start with Raw, which dropped all the turds in all the punchbowls this week.

Enzo's mad at Chris Jericho for cockblockery, and says "schmitten" a lot, which makes me happy. This brings out Jericho and his new buddy Kevin Owens, which means that Kevin Owens is in a bit of a holding pattern right now. There are wose things to watch, though. Jericho-Enzo follows. Enzo appears to be ezpanding his moveset a little, which never hurts. It ends sloppily, and they make the tag match for Summerslam.

Braun Strohman is still squashing jobbers like it's a drawn-out version of the Spider-Man origin story.

Puff Daddy is here! Awkward cross-promotion ensues with Mick Foley, and then the New Day comes out and the cross-promotion becomes less awkward, and Big E's nut injury storyline gets namechecked. Towards the end of the show, it's followed up on by a "funny" video with The Clerb wearing doctor outfits and discussing "ringpostitis" with the usual ball puns. This angle needs Joey Ryan, stat. A pre-main-event tag match with New Day continues the buildup to the match at Summerslam, via a micro-match and The Clerb triumphant. Their attempt to ruin Kofi's crotch is interrupted by Xavier Woods and a steel chair.

The Titus O'Neivil / Darren Young thing continues, with a clumsy version of the Power Differential match ending with Darren young using retributory tight-pulling to get the win. Bob Backlund did not see this, of course. I can only assume this leads to a Summerslam pre-show match, possibly Tights On A Pole.

Seth Rollins Talky Time! Apparently Finn Balor isn't Finn Balor's real name, said Colby Lopez (!), formerly Tyler Black. But it's OK, because they used it to set up Seth Rollins' eventually having to confront The Demon. I still don't think Balor gets the belt at Summerslam, but it'll be fun. This is further pushed by a Finn Balor video interview later in the show with lots of talk of Irish myths and legends, complete with illustrations.

Sheamus and Cesaro are wrestling again, for revenge purposes or something. A couple of new counters hee, but a ref bump and Cesaro win means this is heading for the Summerslam pre-show, where we'll see mostly the same match we've seen the past two weeks because Sheamus.

Brock Lesnar and Randy Orton still don't like each other! Thanks, video package!

The Dudleys have challenged Neville to a tag match with a mystery opponent, because the New Era is going strong! His partner is Sin Cara, and apparently when he and Kalisto split up they both got custody of the music. Sigh. This is dull and pointless. Start the goddamn Cruiserweight division already. At least Neville got his cape back and won with Rthe Red Arrow after the camera POINTEDLY avoided D-Von crawling into position for it.

Rusev and Lana have a wedding reception, because this is the WWE and fuck you, that's why. Roman Reigns interrupts this tedious fucking segment and even that can't earn him the crowd's favor. Roman trying to be funny doesn't help. The cakes suffer the fate of all WWE cakes. Poor cakes. They've tried the funny thing with Roman before, and he's not good at it, but credit for trying? Sort of? Mick Foley makes the match for Summerslam, so maybe we won't need any more hijinks.

Sasha Banks wrestles Dana Brooke in the first match of the night that matters. If Sasha wins, Dana will be banned from ringside at Summerslam. If she loses, it'll be a 2-on-1 handicap match. Going in, logic tells me that Sasha would win, and experience tells me that logic don't always mean shit. But a short match and a Charlotte mistake means no Dana at ringside. Last time Charlotte's assistant was banned from ringside, Dana Brooke came out dressed as Ric Flair. I can only hope for the reverse at Summerslam.

Daniel Bryan and Mick Foley come out to settle INVASION MADNESS, which brings out Rusev, a move so weird Daniel Bryan has to deliver exposition about why it might have happened. And then Cesaro comes out. And now we have a US Title Match between Rusev and Cesaro as the main event. Not only is the excitement of the match woefully undercut by the other rivalries both guys have been involved in earlier that night, but the ending's undercut too - Sheamus costs Cesaro the match, and Reigns spears Rusev to end Raw standing tall in the center of the ring like he's the fucking star of the fucking show that everyone fucking loves and not Roman Fucking Reigns. Bleah.