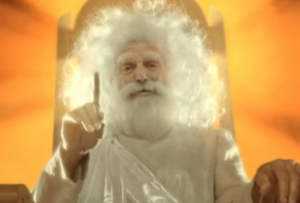 And that's the end of Preacher. And also the end of Powers, as it's been cancelled and there will be no Season 3. Michael Madsen can go back to wearing loose-fitting shirts. I decided to save what I'd written about the penultimate Preacher and just post it with the finale, which is why the prediction of his plan ended up being a bit off.

This a new thing for Preacher. Usually, the show moves through stuff so quickly you're left wondering what the hell happened. But a huge chunk of this episode recaps/reuses all the Old West Saint of Killers origin footage they've already shown us, including a LOOOOOOOOONG looping sequence to show us that yes he's reliving the worst part of his life over and over again in Hell. The show tells us that about three loops after we figure it out, though.

Other than that, the episode is good. Jesse's plan is clear - use the angels' phone to call Heaven and use The Word on God to make him show himself. Cassidy, mostly healed up because Emily fed him the Mayor (which, honestly, is a hell of a twist. I've been neglecting Emily as a character for the most part in my reviews, but she's had one hell of a small-town-single-mom-with-limited-options subplot running through the season), is helping Jesse out because, well, Jesse realized he was being a dick and apologized.

And Tulip is exacting her revenge on Carlos, which is fine, because that was a dumb subplot anyway.

But at the end of the episode, we had Jesse and Tulip - on the outs but still in love. We had Cassidy, the third wheel and vampire. And they were on a road trip to find God and call him to account. And that's Preacher. This season was Preachery, next season will be Preacher.

And kudos to how they got there with the bits and pieces of their alternate version of Annville, complete with a fake God, a town full of hopeless Texans that, in the end, all died in a cow shit explosion, and Carlos being sent on his way.

Ah, Carlos. It's fitting that the dumbest addition in the whole season finally comes to an end and provides the only off moment in the entire finale - the revelation that Carlos somehow caused Tulip to miscarry Jesse's baby. BOOOOOOOO. Boo for hacky miscarriage drama, and boo for making me read three recaps to try to figure out HOW freeing the guard led to the miscarriage and still not being able to figure it out. This was handled so poorly that the only thing that limited the stupid percentage to five is that it was a tiny part of a tiny subplot that ultimately has no real bearing on the season.