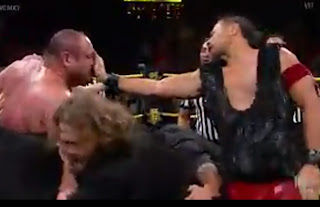 And now for the Wednesday shows. A perfectly passable NXT and an off-the-charts CWC.

We open with an intense contract signing between Bayley and Asuka. While it always makes me sad when the WWE does the "This nice human being everyone likes has to develop a killer instinct to succeed" storyline like they did with Sami Zayn, for example, it's executed well here, and I suspect Bayley will be getting the belt back.

The Authors of Pain have a necessary squash. A post-match beatdown brings out TM61, who also get their asses kicked. The air of mystery surrounding them is an interesting idea, but implausible in the WWE, where Heath Slater needs a contract but nobody even knows the names of the Authors of Pain. Doesn't William Regal have their names somewhere? I bet he'd tell you if you asked.

A short interview with Shinsuke Nakamura proves that he gives no fucks better than anyone in the WWE. Even Dean Ambrose.

Remember Andrade Cien Almas? The horrible hat and suspenders returns for his obligatory "remember I'm a thing" match against Angelo Dawkins, wearing a Dawkins Island shirt which is either homemade or repurposed. Dawkins has been bouncing around NXT jobberville for a very long time, and he basicall spends four minutes falling over after Almas does something acrobatic at him. Imagine if NXT created some kind of context or purpose for these kinds of matches, since they need to have them so often. But it's just an excuse to get Almas in the ring so that Bobby Roode can come out after and challenge him to a match at Takeover Brooklyn and be arrogant.

Next we see Austin Aries in William Regal's office, wondering why, if one former TNA wrestler with an arrogant attitude and a suit can have a match against a Hispanic relative newcomer at Takeover: Brooklyn, why can't two? Regal agrees, and makes a match between Aries and No Way Jose, because it's been a few weeks since we've been reminded that they were feuding.

Time for the NXT Women's Division midcard to build, as Billie "I Have A Cape Now" Kay and Liv "Carmella V2.0" Tyler have a nicely competitive match. Billie Kay wins with an unconvincing version of her new Big Boot finisher.

Gargano and Ciampa get their title match at Takeover, and somewhat surprisingly, have a match against jobbers that answers the "Can they still get along?" question instead of perpetuating it. And no appearance post-match by the Revival, either.

Our main event is Mojo Rawley vs. Samoa Joe. Mojo looks more credible than I'd have thought, but Joe wins with the Kokina Clutch, then applies a second one post-match to bring out Nakamura and about 10 security guys. Then, in one of the more amazing standoffs I've ever seen, the security guys hold back a furious Samoa Joe while Nakamura pie-faces him, slaps him, and laughs in his face before leaving the ring. The contrast was astonishing, and it REALLY made me want to see their match at Takeover.

We kick off the second round with Tajiri vs. Gran Metalik. Metalik won, which I was expecting, in a long, largely mat-based contest of grappling, which I didn't expect. It was fun to watch.

Kota Ibushi and Cedric Alexander put on the kind of match that surpassed what you'd expect even from two of the most impressive first-round competitors. Acrobatic, stiff as fuck, built its own drama, lots of crowd involvement, just a hell of a match start to finish. I hope both guys get hired in some capacity out of this. And since the show ended with HHH coming out and raising Alexander's hand in an apparent spontaneous response to Full Sail's enthusiastic, and totally appropriate, chants of "PLEASE SIGN CEDRIC!", I think that's likely.