I Have Too Many Funkoing Pops

Yeah, I'm part of the problem.

I actually got into the super-deformed vinyl thing with Mighty Muggs, which I still prefer the look of. But you can't argue with what Funko has done with Pops. They've hit a sweet spot in terms of price point, diversity, and sheer quanitity that lets nerds collect a multiverse of figures all in roughly the same scale and form factor. There's a joy in that.


And while there's no denying that generic Pops are boring:
And awful Pops are horrifying:
The awesome ones are, well, awesome:

So this is mostly gonna be pictures of the current state of the collection. I got the Classi Battlestar Galactica ones because, come on. That detail.

Gotta have some wrestlers. Dainel Bryan, Paige (she was on sale), Roddy Piper, and Kevin Owens. 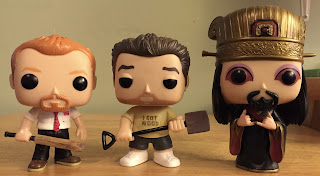 I tink David Lo Pan was the first Pop I ever got. Him, Shaun, and Ed are my only general movie figs.

From general TV we have Gene (Bob's Burgers), Worf (found on clearance), Impossibear (Bravest Warriors), and Space Ghost. They made a Zorak and Brak, but they were Comicon exclusives this year and I'm scared to see how expensive they are. 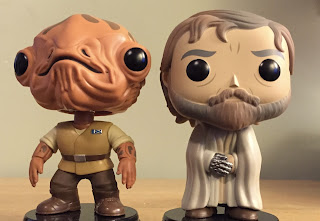 Pops are, of course a trap. Fun fact - the Pop Force Awakens Luke is, to this day, the only toy of Awesome Old Luke in existence. So he was a moral imperative. 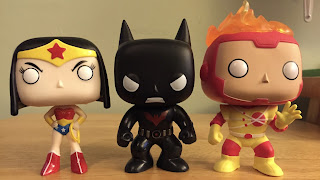 Everything from here on in is superheroes, because superheros. From general-purpose DC is Raven As Wonder Woman (one of my favorite Teeny Titans game characters), Batman Beyond, and Comics Firestorm.

From DC TV, Arrow, Deathstroke, Captain Cold, The Flash. I desperately want Unmasked Slade Wilson, but again, one of those exclusives. 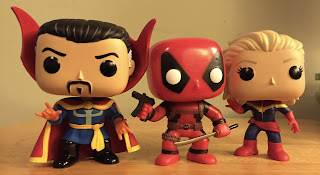 Marvel Comics is represented by Dr. Strange, Deadpool, and Captain M arvel, because, come on.

MCU, TV Dvision. I love all of the Daredevil figs. It's funny how a little thing like having WIlson Fisk playing with his cufflinks turns it from a generic fig into an iconic one. And, of course, Matt's glasses.

The original Avengers, In their Age of Ulton versions, because Pop didn't make figs from the first movie. 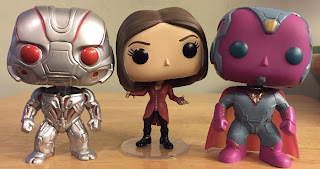 And here are the Agoe of Ultron specific ones.

And finally, the Civil War ones I liked. This makes Hawkeye the only fig I have two of. He was the price of admission for getting the awesome Spider-Man, and I don't mind having a Hawkeye with a bit more purple in the outfit. The tiny Cap and Iron Man were also part of the Spidey set.