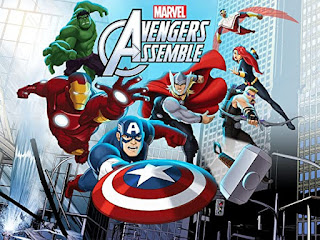 One of the fun things about projects like this is disambiguating “bad”, I don’t like it”, and “Not intended for me”. The first season of Avengers Assemble, after much consideration, is mostly nad but works its way to sorta competent by the end.

The biggest problem of the show is just weak, uninspired writing. Ultimate Spider-Man felt effortless, Avengers Assemble seems effort-free. From start to finish, shoehorned-in MCU references, mostly from Avengers, are used to clumsily prop up weak plotting and characterization. I lost count of how many “billionaire genius philanthropist” references they dropped.

The Iron Man / Cap dynamic plays out in the same tired ways - old vs. new, different leadership strategies. Thor is so one note here it makes me long for the clumsy Jane Foster stuff in Earth’s Mightiest Heroes. Hawkeye and Widow are on model and nothing more. Which leaves Falcon and Hulk.

Falcon is the young newbie, which means a bit of hazing and the butt of jokes which plays badly when he8s the only Avenger of color. The one time he gets focus is when he’s worried his mom will learn he8s an Avenger, which is also when we learn he’s only 17, which is a weird thing to find out 23 episodes into a 26 episode season.

Hulk is the most interesting part of the show… sometimes. The season’s best ep is #11, “Hulked Out Heroes”, with the dreadful premise that all the Avengers turn into Hulks. But here it’s a lesson on how difficult it is to be Hulk 24/7. There’s even some good characterization foreshadowing this in some previous eps  The Hulk also headlines the second best episode, “Hulk’s Day Out”, which ALSO has an awful title and premise but further expands and rounds out the Hulk’s character in delightful ways that then vanish completely during the 11 episodes that follow.

The back half of the season instead settles into by the numbers action cartoon stuff with a couple comic relief episode that smooth out some of the glaring flaws of the first half but never aspire to more than that.

Also, I know this is an issue in everything, nut this season is insanely egregious when it comes to plot specific power levels. Attuma, Hyperion, the Super Adaptoid, Galactus, Odin, and a Tesseract-powered Red Skull are all, at various points, both completely unstoppable threats and surprisingly hurt or slowed down by a trick arrow. It’s fucking distracting in a speed watch.