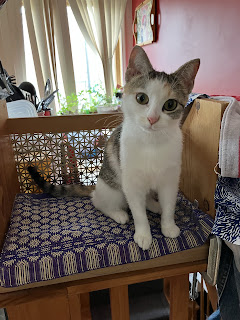 So this is why I haven’t posted anything for a few weeks even though I’ve gotten new toys, finished Avengers Assemble Season 1 and done a writeup, and made a new batch of Dream Match toy pics. And gotten new toys.

This is Kimchi, aka Spicy Girl, aka What The Fuck Did You Just Eat. She’s about 14 months old and will have been living with us for three weeks as of Friday. She’s our third cat, and she’s an interesting little kitten.

She came to us after two fosters. The first neglected her after she was spayed, leading to infection and followup surgery. The second foster got her through the second surgery recovery and took care of her for about a month before we adopted her. As a result of all this, she’s wary of people, very obsessed with all food, and is still learning that hands and feet aren’t toys.

She’s also clean and sober as of yesterday - she’d been on three doses of gabapentin a day until about a week before we got her, two doses when we got her, one dose about a week after that, and off it as of today. We’ll see what that does for her overall energy level and manageability.

She still hasn’t physically interacted with our cats yet - we’ve been doing a very slow introduction with isolation, just over a week of site swapping, and a couple days of relative near-feeding. Nobody seems to hold grudges about stuff really, so we’re hoping things go relatively smoothly once everyone gets the whole house.

Did I mention obsessed with food? We’ve had to close off key garbage and recycling  cans, keep the kitchen relatively immaculate, and bin up all our snacks and pantry items. First she tore into the bagged snacks. Then she ate two Hershey’s Kisses, complete with foil. (All medical protocols were followed after that - no issues.) Then she got into the elevated pantry basket and ate an entire dried shiitake mushroom so now that’s in a bin too. And if she’s in the kitchen, you bet any surface with a remnant of flavor on it is gonna get licked within an inch of its life.

She has a kitten’s play energy. She gets playtime 30-45 minutes at a time at least 4x a day and it seems like she’d do more if she could. She also likes to play solo by picking small toys or an entire sink stopper in her mouth and throwing them in the air with her head. 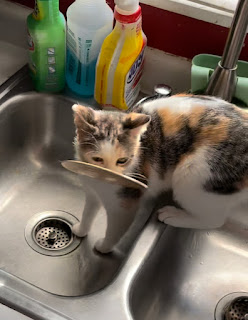 She can also be very sweet. She’s not into being petted yet much, and is generally averse to any person-initiated contact, but she’s fine with brushing up against us, flumping against us for a short rest, curling up near us, etc. If she touches you, that’s great. The other way around is a crap shoot.

She’s also smart as hell. We got a puzzle toy  on a recommendation for the food obsession issue. We got the hardest one we could identify. She solved the whole thing in two tries, one try per day.]

There’s a lot of work still ahead, and we don’t know what kind of cat she’ll end up being in a long term safe and stable home, because, well, she doesn’t know that yet either. But we’re looking forward to finding out.