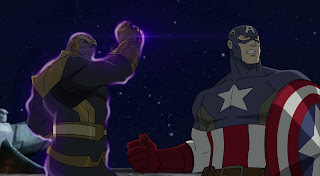 For about 10 episodes of Season 2, I thought I was gonna describe this season of Avengers Assemble as comfortably settling into the very average mediocrity Season 1 eventually found. It was telling a barely serviceable knockoff of the Infinity Stones saga where all the stones are on Earth (well sort of), there is no Soul Stone, and each stone is acquired by our heroes  over the course of a single half hour episode.

But then everything went sideways. Thanos, and the fifth stone, appear again out of nowhere. He gets all five stones, and is only stopped because Arsenal, Tony’s Dad’s weird robot introduced at the beginning of the season and self-sacrificingly blowed up at the same time, gets rebuilt in time to, um, absorb all the power of the Infinity Stones, get taken over by Ultron, and vanish.

This is all very confusing, not only because Ultron shows up for the first time and everyone acts like he’s been around forever. This isn’t the first time in this batch of cartoons done by the same people that flashbacks and referenced to shit that presumably happened before the show started have happened - Ultimate Spidey did it too a handful of times. I get it but it’s a weird choice that lands weird.

Anyway, the season does a short stretch where they sorta kinda do Civil War, breaking up the Avengers into a Cap team and a Tony team for a couple eps before everyone makes up. The breakup is caused by weird character choices and/or other characters weirdly deciding those choices are unacceptable now

Anyway they beat Ultron and spend the rest of the season back with the Squadron Supreme, an evilJustice League knockoff, and none of this is good except letting Falcon be a super-competent genius who figures everything out and wins the day.

The plotting is all over the place, there is next to no character consistency, relative power levels are plot-skewed to a degree far above and beyond even the usual degree in these cartoons, and it’s just a mess overall.

On top of that, the nods/homages/cribs/ripoffs from the MCU movies are even more egregious and out of place this season than last season. Just jarring and off-putting

Season 3 is when they start naming the seasons stuff, and this season is something about Ultron (again). We’ll see how that goes.