This is pretty basic and self-explanatory. Two figures, wrestling ring background, make it look like they’re fighting. There’s gonna be a bunch of these because, well, I think it’s fun. 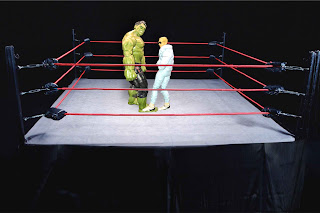 Here we have Orange Cassidy (Jazwares AEW Unrivalled and one of my favourite action figures of all time) doing his patented Sloth Style shin kicks against The Hulk (in this case, Hasbro’s Studio Series from the first Avengers movie, 2012) because that face and head tilt screams “what the fuck is this guy doing?”

The second of these will also include Orange Cassidy because Orange Fucking Cassidy, that’s why.