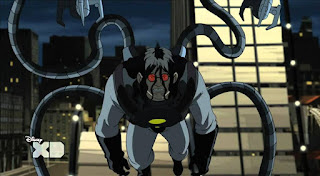 If I were to say one thing about “Ultimate Spider-Man”, I’d have to say this. It goes down reeeeeal easy.

Now, when you watch 104 episodes of a cartoon in two months, you’re going to notice some things. You’re going to notice a HEAVY reliance on trying to convince friends and acquaintances to “fight it”. Whether that “it” is mind control, symbiote control, the influence of animal DNA, or some combination of all three, I don’t think there’s more than a handful of characters over the entire series who don’t eventually shrug off one or more of those things. No major villain is permanently evil, right up until the very end of the show.

You’ll also notice a theme of “Redesigning Doctor Octopus”. I mean like five or six times. His initial design is about as far from classic as you can get, as you can see above, but there’s a bunch of other armoured, mutated, and nanotech-altered versions. There are more Dock Ocks than there are seasons.

There’s also attempts at longer-form storytelling, trying to weave together and tie back the stories over four seasons (two regular, one subtitled “Web Warriors”, and one titled “Sinister Six”) that again reveal the kind of cracks in the foundation that only a kids cartoon from a decade ago watched by a guy in his fifties over a very short period of time would have.

There are some weird choices, yes. Scarlet Spider is basically Shittier Wolverine. Kaine is a Spider-absorbing mindless synthezoid. There are a LOT of crossovers with Hulk: Agents of SMASH, which I won’t be watching for a bit because Disney+ put the Avengers Assemble tile in front of it so I have to watch that first according to The Rules.

But overall, it’s snappily written, really entertaining, well animated, never really problematic beyond the team subscribing to the One Girl Rule for most of the run, and just generally entertaining. Goes down real easy, which isn’t true of a lot of these.

Next up, a brief sojourn into the Heroes United movie series before ONE HUNDRED AND THIRTY FUCKING SEVEN episodes of Avengers Assemble.