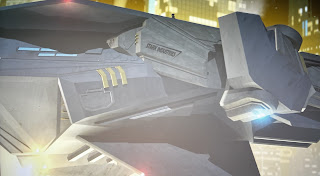 Can you call it a palate cleanser when it’s mostly garbage?

Heroes United: Iron Man and Hulk is the first of a series of PS4-launch-era-style CGI cutscenes that try to leverage the popularity of the MCU and the success of the DC Animated direct to video movies as cheaply as possible, and it shows.

It’s not… incompetent per se? It’s a story about Hulk and Iron Man teaming up to stop the newly-created Zzaxx, and that certainly happens over the course of a bit more than an hour. But the story is thin like mountaintop air, the CG is  very fancy for the early 2000’s but unimpressive given that it came out in 2013, and the whole effort is just slapdash and shoddy.

There’s also a completely out of place action sequence where they fight a bunch of wendigos. Again, I’m assuming the models were repurposed. The sequence is meant to show Hulk and Iron Man working together when Hulk can’t see and Iron Man can’t walk, but half the time Hulk is beating up the wendigos anyway without direction from Iron Man and it’s wildly inconsistent how much he can see or not see during the entire time the blindness thing plays out.

Since this is essentially the two of them carrying the whole movie, Hulk is pretty smart with a huge vocabulary because MCU movies have snappy dialogue and so this movie has a lot of banter that looks snappy if you squint at it from a distance and an electricity monster has given you “welder’s blindness”.

It’s just quick, cheap, capitalizing filler to have on Blu-Ray shelves to sate the market need post-Avengers. There’s one more of these in my future and I’m not looking forward to it.