So, I guess my hobby needed a hobby?

I have a lot of action figures. And in the latter half of 2021, I started getting back into 6-ish” scale in a big way, thanks mostly to Hasbro, a bit of DC Multiverse, and Jazwares’ All Elite Wrestling toys.

Some people take pictures of them. Hey, that’s a thing I could do! But I didn’t have good lighting or a background so I went and got myself a cheap photo box, 16x16, LED rings in the top, color inserts for backgrounds. This works out beautifully. It’s small enough to fit on the table where I spend most of my idle time, the lights are bright, the USB cable just reaches to the nearby outlet, and the cats find it fascinating. 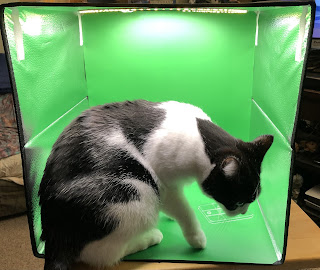 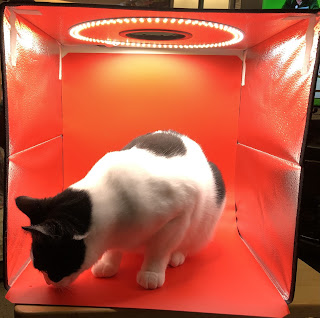 And I got some fancy stands - clear plastic jointed stands with a clip for waists or thick legs. I went cheap on these and I -may- regret that going forward because they’re a bit of a challenge from a structural integrity standpoint with bigger / heavier figures, but so far I’ve managed.

I also needed software. Software for background removal and replacement. Something simple that works on an iPad because this is a hobby and if I ain’t gonna learn Photoshop for work I’m not going to learn it for a hobby. Also,Adobe loves tiny fucking icons and my eyes are trash.

Of course, the world of iOS productivity software is a goddamned nightmare forest full of bandits, tricksters, and snake oil salesman. I went through dozens of free trials of apps with the word “green screen” in the title but they were all video-focused, and even when they did photos they took the photos themselves instead of working with the photos in my library. I take the pictures with the good camera in my iPhone and edit them on my iPad so it needed to work with the photo library.

I then dropped 8 bucks on Pixelmator Pro, which had the advantages of looking and acting like a legitimate app but, it turns out, doesn’t do background removal. It does object removal. Luckily, this proved very useful later.

I then found ProKnockout, or KnockoutPro, and it was one of THOSE apps. You know.. The productivity app version of a Sexy Slots Win Real Money mobile game. Definitely foreign-produced. 50 different subscription options, all confusingly named, all at different prices. A few prominent interface elements that exist solely to point you at their other apps.

But it did the job. It cuts out objects from backgrounds with a solid algorithm, it lets you save those cutouts, and it lets you layer any number of cutouts with any number of backgrounds to your library. And, if you’re careful, you can buy the whole thing outright, no subscriptions, for 20 bucks. So I did.

And then it turns out that Pixelmator Pro’s object-removing AI is great for erasing the bits of the stands that show. WIN. Or cleaning up parts of certain specific toys that don’t apply to the pic I’m trying to get. BONUS WIN.

As with all hobbies, it makes me want more tools. It might be the legit use case I need to finally get a new Apple Pencil for the iPad Pro. I’d also love something that lets me create energy blasts and explosions, if I’m ever emotionally capable of hunting for THAT in the App Store.  But I have what I need to get started and you get to see the results here very soon.