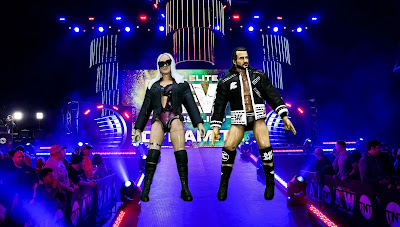 I may or may not have mentioned this recently, but I've discovered a new best way to buy AEW figures. Wait until Ringside Collectibles has decided they can't sell any more at full price. They then sell them for less than full price. Sometimes a lot less.You take a chance that they'll run out of a figure before the sale, but if so you can always wait to see if they show up at Target, or you can pre-order the ones you can't live without at regular price and still come out ahead on average.
Anyway, Unrivaled Series 11 and Unmatched Series 5 hit this point in early December, and after some holiday and weather related shipping kerfuffles, they ended up in my hands a little before Christmas. From Unrivaled 11, I got Penelope Ford and Adam Cole, seen above in their entrance jacket. 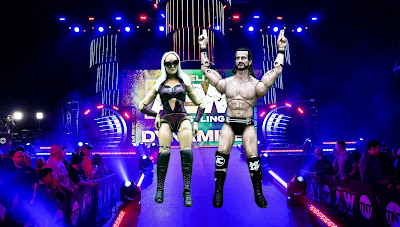 And this is Penelope and Adam again, only this time, with their entrance jackets removed so that THEIR ARMS CAN MOVE AT ALL. I ran into this with Tax too. Rubber jackets look good if all you want is wrestlers standing still with their arms at their sides but who wants that? 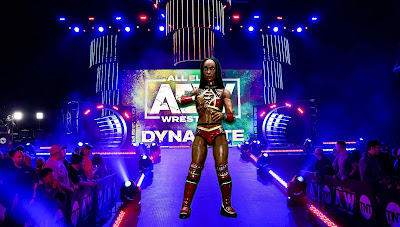 And from Unmatched 5, Red Velvet, whose hand is ALMOST the pointing hand for her Stir It Up taunt but not quite. All three are solid, if unremarkable, representations of these characters circa early-to-mid 2002. Since then, Velvet has turned heel, aligned with Jade Cargill, and is now unaligning with Jade Cargill. Cole is still out after two concussions, and Ford has returned from injury and is pretty much the same.
But wait! I'm now $15 or so away from free shipping! I wonder if there are any recent WWE Elite figures of characters / wrestlers I like on steep discount? Why yes, there are! 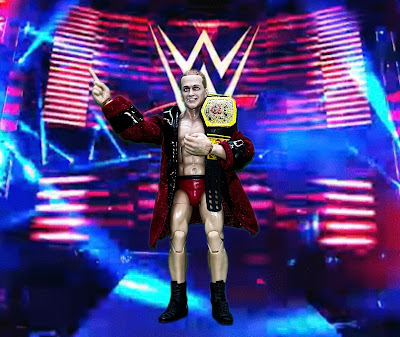 Here we have NXT / NXT UK's Ilya Dragunov, who I don't see nearly enough of since I stopped watching most WWE product on and off over the course of 2022. But he's great and has put on some of my favorite matches and this is a good figure of him and he comes with the belt of the now defunct NXT UK and he was ten bucks and hey he can move his arms in his jacket! 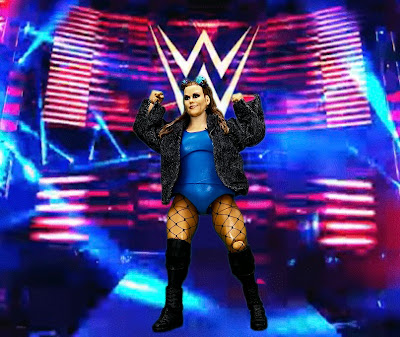 And last but not least, Doudrop, which is a stupid name given for stupid reasons to the great Piper Niven, who's been out a while for health issues but who I remember fondly from her various appearances since, again, I fell way off of watching WWE. Also ten bucks, also a cloth jacket she can move her damn arms in.
Neither Unrivaled 12 nor Unmatched 6 are up for pre-order, which is a little odd. Unrivaled 12 has both FTR, who iI skipped the first figures of, and Private Party, so assuming all four get cheap I'm on board for them. Unmatched 6 has a must-buy Ruby Soho and a maybe Malakai Black, although I really want to wait and see if the super fancy Supreme one drops in price, because it has all the stuff but $50 is way too steep. And then there's Unrivaled 13, with the pre-order at probably-an-inflated-price Danhausen. Gonna be a fun year.