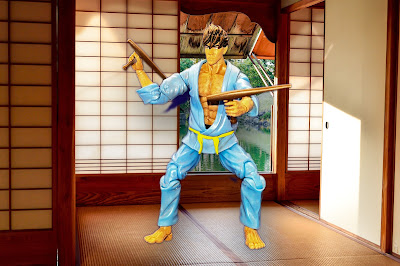 As a Toy Guy, I spend a lot of time on YouTube looking at toys and toy news, and boy is there a wide variety in quality there. They range from channels so bad I’ve blocked them from ever appearing again (cough cough Shartimus Prime cough cough) to channels so good I guess they also make toys and I’m buying the toys they make?

Fwoosh Toys is an offshoot of The Fwoosh, the alpha and omega of kindly, reasonable, coming-across-at-least-as-decent-human-beings toy coverage on YouTube. I think. I mean the alpha and omega thing is definitely true, or as true as an opinion can be, I’m just not sure about the whole offshoot thing. There’s a  review website, a YouTube channel, and a toy line, and I could not tell you with any authority which came before which came before which.

The point is, they’re either good people, or very very good at acting like good people all the time, which in 2023 is about the best you can hope for from a par asocial relationship. So, over the fall, they announced a 1/12 scale skeleton figure that was so nifty I felt compelled to preorder it.

And then, after Thanksgiving, they had a sale. A good sale. I don’t normally buy generic figures, but I also don’t generally stop myself from getting cool stuff at a decent price based on arbitrary self-imposed rules, so I grabbed two figures and a bunch of accessories for Unspecified Indeterminate Future Plans. 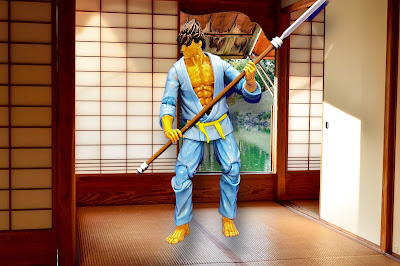 The Martial Artist is, well, a martial artist. Light blue outfit, excellent articulation, good sculpt, extra hands, two tonfa, a spear, and his hair comes off, which you wouldn’t think was relevant but will come into play a little later. 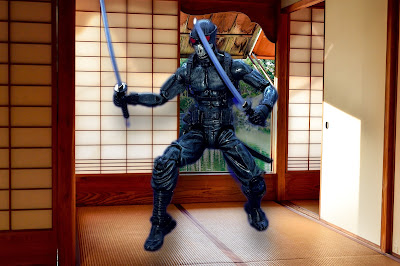 The Modern Ninja is a sort of pseudo-sane Eyes, with some swords and some guns and a teeny tiny silencer that I don’t think I’ve lost, yet but it’s only been a couple of months.

The only real problem with him is the overall low contrast - he’s all dark so the details don’t pop. But again there are options for switching him up a bit, thanks to… 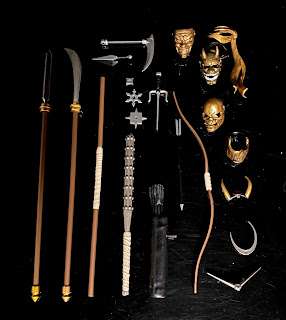 The Ninja Accessory Pack. A bunch of weapons and masks and shit. Including a teeny tiny throwing star that I don’t think I’ve lost yet, but it’s only been a couple months.

Everything is painted well and engineered correctly to work with the figures, which is nice. The masks, for example, go on the Martial Artist easily when you remove his hair. See? Told you it'd pay off later.