So, yeah, in September, we spent two weeks on a whirlwind bus tour of the British Isles. A lot of it was very structured (which isn’t always ideal but definitely what we needed last year) but but we took every opportunity we could when we had meal autonomy to seek out something interesting. And frankly, with so much else out of our hands, it was easy and fun to spend the time and energy seeking out food. So these are the five (six) most memorable things I ate while on vacation so many months ago I had to look a bunch of the details up.

I can’t in good conscience put this on the list or remember the name of the restaurant or even the hotel in the deep outskirts of Dublin we ended up stuck at for two meals, but holy shit, they did Buffalo wings right. Even though correct wing sauce is Frank’s hot sauce and butter, two incredibly common ingredients that are easy to combine, for some reason, nobody fucking does this.

Well, this Dublin restaurant fucking did it, and I had them both nights we were there because, while I wasn’t homesick for American food by any means, they were better than any Buffalo wings I’ve gotten in the Twin Cities in years. 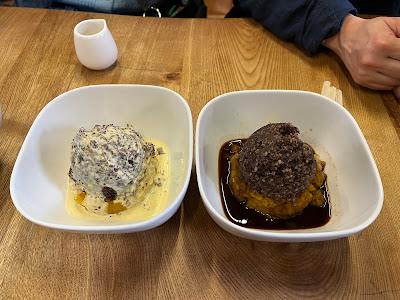 Cathy’s mom wanted to try haggis in Scotland. Perhaps not unsurprisingly, around downtown Glasgow where we were staying, none of the restaurants had regular haggis. They had haggis on a burger, haggis on a pizza, and deep-fried haggis (which she also tried at one point) but not haggis haggis.

So, since we were going to be in Edinburgh hanging around the Royal Mile in a timeframe that roughly lined up with lunch, I found The Haggis Box, the local equivalent to what in Minneapolis would be a little Skyway restaurant that served two things - haggis and vegetarian haggis. With a choice of two sauces - whiskey cream and red wine gravy. As a general rule a menu that specialized is usually a good bet and this was no different. The three of us split two haggis, one with each type of sauce, and while I wouldn’t say I’ve been craving haggis ever since, there’s nothing wrong with ground meat and grains over mashed root vegetables with a tasty sauce on top. 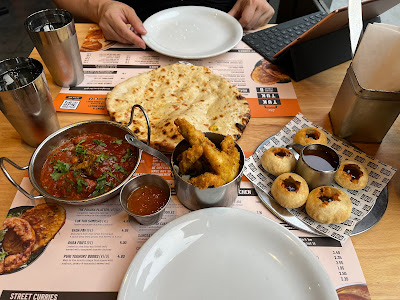 Downtown Glasgow didn’t have a lot of haggis, but it did have really good Indian food. Our second choice for dinner during our first night in Glasgow, because our first choice was a bar and restaurant that we were pretty sure had reverted to Just A Bar by the time we got there, but that’s OK, because this was really good. Chicken 65, chili cheese naan, golgoppa, lamb curry, and a mango lassi. All super tasty.

Sadly, it looks like the Glasgow location closed down, but it wasn’t their only location. 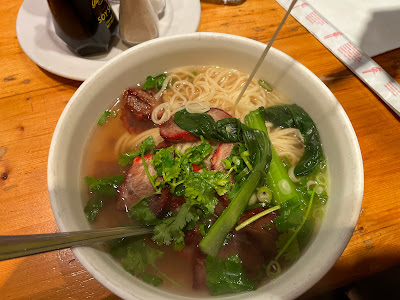 So, here’s the thing. When I’m in a strange area, doing a Google Maps search on restaurants sorted by distance, there are certain phrases that leap out at me, and “hand-pulled noodles” is one of them. So on our free day in London, hanging around Charing Cross Road, I saw that phrase and we headed over.

Tiny, with group bench seating, and I technically didn’t plan on ordering soup, but it’s the kind of place where you can screw up your order and still win. Only regret was that there was no way to take half of it along with us, because it was too much food for lunch and leaving it behind seemed like sacrilege. 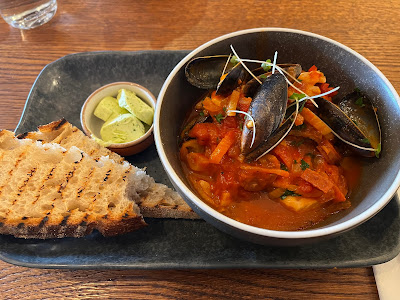 The entire run from Kilkenny down to Waterford was spent hunting for lunch on some spotty cell data coverage, but holy shit did it pay off. An unassuming Mediterranean restaurant with shockingly good food.

We also got an open-face mackerel sandwich, vegetable soup, and sweet potato wedges - most of which are not currently on the menu as it’s a seasonal/changing menu place. But without a doubt it was the best value meal we had the entire trip 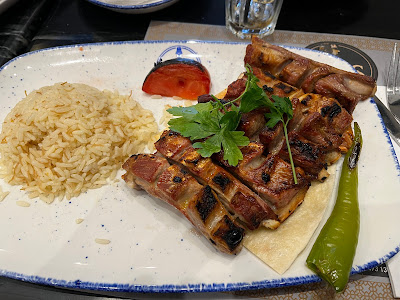 We almost didn’t eat this.

The plan for our second dinner in London was to try a tacky London fast casual chain to try the kinds of things we don’t get at American chains, like diner kebab and peri peri chicken. The Turkish restaurant on the corner was the backup plan.

But, when the tacky chain outlet in the neighborhood turned out to be a takeout-only hole in the wall, we went with our second choice and I realized my first idea, while sound, was also criminally insane. These lamb ribs may have been the best charred meat I’ve ever eaten. Certainly way up there on the list. Everything else was very good - bonus points to the salad which used the GOOD feta. The creamy, mild stuff, not the briny crumbles.  We left very happy.

Email ThisBlogThis!Share to TwitterShare to FacebookShare to Pinterest
Labels: Food