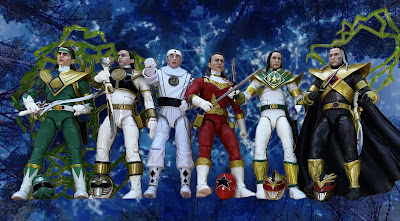 Over the 30 years of Power Rangers history, the character of Tommy Oliver (Jason David Frank) has played a bunch of roles:

Plus, in the comics (apparently), he’s the evil Lord Drakkon, in regular, Evo II, and Evo III forms.

That, assuming they never do a Civilian Tommy, and discounting the just announced Metallic Armor Tommy which I’ve decided doesn’t count, means that there are ten possible Lightning Collection Tommy Oliver figures. They’ve made six. And as of about three weeks ago, I owned all six. So it was time to start work on my Dumbest Masterpiece Ever.

But there was a problem. In the Power Rangers box there is a heads bag. In the Heads bag go all the spare heads. Most Lightning Collection Power Rangers come with a helmet head and a human head. EXTRA HEADS GO IN THE HEAD BAG. Five of my Tommies had their human heads attached. Zeo V did not. A total of one head was missing from the head bag. Zeo V Tommy.

This ruined everything, but a couple weeks later, I fixed it. We won’t discuss how. But I did it. Look, one of my other Zeo swords broke off at the hilt and it was retail and it was TOTALLY JUSTIFIABLE and we will not be discussing it further.

And so, we have the Assemblage of Tommies. A photo I’m happy with. It’s fine. Six Tommies, six helmets, some of the Evo III green lightning effects, in the background. Perfectly respectable picture. But not my Dumbest Masterpiece. No, my dumbest masterpiece is a bonus for sitting through this text or following me on Twitter. The true OOPS! ALL TOMMIES: 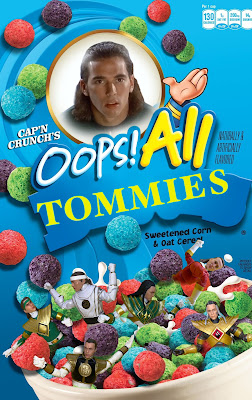 No need to hold your applause. We all know it’s well-earned. And if you think I won’t be updating ALL this shit if they ever make Movie White, Turbo Red, Dino Black, Evo II, or heaven forfend a Civilian Tommy, you know this is getting updated. In for a Tommy, in for a pound.
Posted by Bryan Lambert at 9:54:00 AM