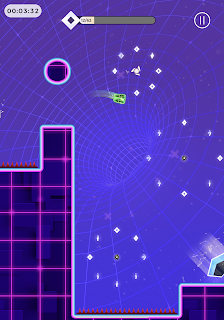 Volume II of The Loadout covers mobile games. All these games are played pretty much exclusively on my iPad Pro, aka my primary computing device, aka my Large Print å

My mobile games generally serve two purposes. First, they fill loose white space in the day. Couple minutes here, couple minutes there, or something going on in the house that doesn’t need all my brain? Some of the brain goes to the game. And then there are games that i play specifically because they’re suited to a touch screen, or whose very nature makes them better iPad experiences.

They also have to work with my trash eyes. They either have to be workable on their own, or paced (and have touch implemented) in souch a way that using the magnifier lens doesn’t interfere.

These aren’t all the games installed on my iPad, mind you. These are the ones that get played. There are a lot more that are either there because I think someday I’ll get back to them (Hi, Fantasian! I have two long plane trips coming up!) or stuff I just haven’t bothered deleting. And since I subscribe to Apple Arcade, every week there’s something auditioning for a spot in the lineup.

As is my wont, I’ll break these down by ecological niche.

Only one game gets to live in the dock. It has to be a game I love and expect to play a lot. For the longest time, the dock game was Marvel Puzzle Quest, before I shook that monkey off my back. For a very short time it was Rocket League Sideswipe, But right now it’s Sp!ng, a game that is shockingly difficult to search on thanks to that exclamation point.

Sp!ng is, at its heart, a moderate-difficulty platformer with instant retry. The goal is to get to the exit and grab all the collectible bits for each level. Except there are no platforms and no jumping. Instead, you one-touch grab and swing your dot around other different dots using rotation and momentum and gravity and the various on-screen elements to collect all the collectible dots. It’s elegant and immensely satisfying. There are enough levels at this point to keep you occupied for a good while. And.

And every day, there are three random time trials containing one, two, or three levels, with leaderboards. So every day I try to get in the top 100, and most days I can. It’s my favorite Apple Arcade game, and if you subscribe, you should play it.

There’s always a grinder. There’s rarely more than one grinder, but there’s always a grinder. The grinder satisfies my itch to make bars fill and numbers go up. To collect all the things through repetition and persistent skill upgrades. In the days before Apple Arcade, the grinders were freemium games where I would try to beat the in-game economy for as long as I could before moving on to something else.

Apple Arcade often takes freemium game models,modify their economy slightly to remove the in-app purchases and sometimes the pain points designed to cause them. I’ve moved through some Star Trek collecting RPG, Galaga Wars, and a coiuple of match-3’s (Simon’s Cat, Zookeeeper World) but am currently on a Sonic-themed endless runner. Probably nearing the end of my time with it because at this point half the stuff I collect at this point is stuff I don’t need. Don’t need XP, don’t need gems, don’t need 95% of the character tokens, but the game keeps giving them and not letting me turn them into anything else! So it’s just grinding out rings and special coins I turn into lots of rings that then vanish into the pit of the last few skill upgrades for characters I don’t use. And chasing the last few achievements that rely on the game serving up the conditions for meeting them.

Not an Apple Arcade game, but a regular limited-free full-pay game I paid to make full. I love word games in general and tend to hate them in their specific implementation, but Knotwords does it for me. It’s 79% crossword and 30% sudoku/Picross style logical deduction  and that right there is my sweet spot it turns out.

I do recommend changing the default settings, though. Words can be evaluated as “legal” or “correct”, and if it’s set to “legal” you can go a long time without realizing a word you entered won’t work out. Which delays and puts off the good part, which is making the connections and filling in the spaces once things get rolling. Setting this to “correct” speeds along that “getting started” process . It’s a bit of a cheat but you’d be surprised how little you end up relying on it.

This is a for real game, with real levels an and ending and everything. No grinding, no persistent progression, just cartoony dungeons you clear using acquired skills and dice rolls. I tried it on Game Pass and knew I’d hate it on console and love it on iPad and a couple weeks ago I was proven correct in that regard. I’m  hitting a bit of a wall right now but still love the sound my head makes against it.

HEROish is so new that it came out after my first pass at this and immediately slotted itself into the rotation. It’s one of those basically left-to-right army games that plays like a tower defense game except there’s no towers. It’s all about units and upgrading the units and summoning the units and hoping you’ve done that enough to pass the level because trying to figure out why you failed with everything going on on screen is impossible. But it’s fun  and colorful and reasonably well written and the fonts are nice and big.

ON TRIAL / PROBATIONARY / LINGERERS: Air Twister, Shatter, Into The Breach, Frogger and the Rumbling Ruins

These are games that I didn’t delete immediately upon finding them Not For Me, but also games that I don’t find myself returning to as much as I think maybe I will someday. They’re on the bubble until I decide that page of the home screen is too cluttered.

Air Twister is basically Space Harrier or Panzer Dragoon, but with permanent progression elements and the most confounding fucking soundtrack I’ve ever heard in my life. The entire soundtrack comes off of “Is this a Queen song I’ve just never heard?” and apparently they’re not Queen songs, they were deliberately crafted to sound like Queen songs you’ve never heard. Except sometimes they don’t sound like that either? None of this ties thematically with the game at all. It’s a constant distraction. I ended up turning the music volume down to Barely Audible just so I could play the game but also I only sort of enjoy the core gameplay loop and that’s less on its own merits and more nostalgia for the games it draws from.

Frogger is a slow-paced 3D navigational puzzler that has very little to do with Frogger and is… fine. Hence the bubble.

Shatter is a Netflix Games port of a PS3 Fancy Breakout game and I played it a bunch and then stopped and didn’t start again but I might sometime?h

Into The Breach is a longstanding tactical RPG type game which makes its way to mobile for free also courtesy Netflix. This one’s still in early days with me while we negotiate whether or not the overarching structure will piss me off more than the core gameplay loop makes me happy. I love tactical strategy games but only if they’re fairly simple and free of fiddly shit. Jeanne D’Arc on PSP, not Final Fantasy Tactics on GBA, if you catch my drift.

Email ThisBlogThis!Share to TwitterShare to FacebookShare to Pinterest
Labels: Gaming, The Loadout