XBox Series X: One Week In 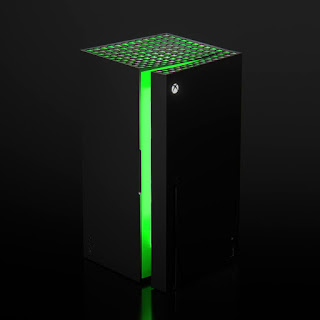 So, yeah. One week in to owning an XBox Series X, and in a completely unshocking outcome, it’s a bit of a mixed bag. I’ll be comparing it to my months-old Playstation 5, which may  not be fair, but is inevitable.

Why did I get a Series X? Honestly, a combination of Psychonauts 2 and poor impulse control. I hadn’t planned on getting one anytime soon, because everything I’m going to say I don’t love about the console I knew going into this generation. But Psychonauts is one of my top five games of all time, and the Series X is gonna have the best version. The Playstation version ins a PS4 game, not a PS5 game. So I got a Series X.

Let’s start with the shape. The Series X and the PS5 couldn’t have taken more different approaches to form factor. The PS5 is striking, with sweeping curves and a white and black color scheme. The Series X looks so much like a mini fridge that Microsoft has been forced to lean into the comparison and make an actual Series X mini fridge.

On the other hand, if you’re looking at the console while you’re playing a game on it, you’re doing it wrong. And the Series X is way  more practical. A PS5 placed horizontally is a slippery fucker, making plugging cables in either a chore, a two person job, or both. The Series X (currently vertical but the same would be true horizontal) doesn’t slide around at the slightest touch, so you can plug an Ethernet cable into it one handed. It’s also about 20% smaller overall.

When it comes to controllers, though, the PS5 wins by a mile. The Series X controllers are infinitesimal upgrades from the XBone controllers, with an extra share button, some texture in the plastic, and a slightly different D-Pad. The Dual Sense is a whole new ballgame with the haptic feedback and adaptive triggers. I’d never consider playing a PS5 game with a PS4 controller, but I have no problem using the two remaining controllers from my XBone for the entire life of the new console.

To me, the PS4 interface is as close to perfect as a console interface gets. The PS5’s interface isn’t as good, because it’s missing features like folders that made managing a large game library easy, and, of course, there’s a lot more real estate devoted to promotional content.

The Series X is the latest evolution of the XBox One interface, which went through a ton of revisions and never got it right. It’s usable, and it’s as good as it’s ever been, but it still doesn’t follow any UI logic that I understand or recognize. I -think- it’s trying to adaptively help you by putting important stuff at your fingertips, but if so, it’s pretty bad at it beyond a somehow even shorter list of “recently accessed games and apps” than the PS5’s already dinky-shit list.

XBox has Quick Resume. It lets you suspend the console and pick up where you left off in a game. Which the PS5 does, but only for one game at a time. XBox does it for FIVE games, which is huge and would save me a ton of hassle on PS5 when I need to interrupt whatever single-player jaunt I’m in the middle of to hop over to a regularly schedule evening of Rocket League. It’s fantastic.

It’s also really the only “next-gen” thing about the Series X at this point. It’s got a lot of power under the hood, but there isn’t a single thing on it, seven months after its release, that wouldn’t have looked almost identical on my PS4 Pro. A lot of stuff is 4K and HDR, but there are a lot of “upgraded” last-gen releases and no to almost-no exclusives even now. I haven’t seen anything that looks as good as Miles Morales or Astro’s Playroom, much less R&C Rift Apart.

I’m sure it’ll get there, but unless you entirely skipped the 4K/HDR  upgraded console part of the last generation, nothing here is going to wow you with the visuals. Load times are good, but not PS5 good. The drive is bigger, and the relative dearth of next-gen games means it fills up slower, but that’s a slightly weird “compliment”.

There is one other small area where the Series X beats out the PS5: an infrared remote receiver. Sony’s inexplicable decision at the start of the PS3 generation to only use custom radio remotes has been a complete nightmare for anyone wanting to play discs on their console.The PS4 could connect to a Harmony Hub, but when you did you ate up one of the four available channels also used for controllers, so it was fucked as a disc player. The PS5 isn’t even supported by Harmony. But early indications are that the Series X could replace my standalone 4K Blu Ray player if I want it to.

So, yeah. Overall a mixed bag. I don’t regret the purchase, and certainly Game Pass is a great value, but right now, at least, PS5 is delivering next-gen games and experiences and the Series X isn’t, to anywhere near the same degree.