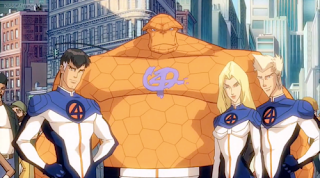 Specifically, “Fantastic Four: World’s Greatest Heroes”, a 2006 cartoon that ran 26 episodes, features a mix of 2D animation and CGI, with heavy anime influence on the character designs that oh also is very bad.

This series was a slog, I’lll admit. Just rough going from the first thee minutes, where Sue faints at the news that her brother has been teleported off the planet, all the way to episode 26, where they fight Terminus, wh’s kind of like Galactus, only smaller and derpy.

Along the way, they face a variety of fairly shitty versions of classic FF foes, including the Mole Man, who’s introductory episode is, on Disney Plus, episode 25, after he’s already appeared at least three other times.

But all of that plays second fiddle to the wacky hijinks, which mostly consist of Thing and Human Torch pranking each other and the Baxter Building’s array of inexplicable tenants, who live there despite the constant alien and monster attacks that frequently send the building into space or underground. I mean, I know rent control in NYC is coveted but…

The tropes are incessant. They settle on them early and they never let up. Johnny is impulsive to the point of constant dangerous stupidity.  Ben frequently mopes about being ugly for most of an episode before being fine with it by the end. Reed’s a nerd. Sue’s all over the place, from weak female to schoolmarm big sis to the occasionally enjoyable “no longer putting up with this shit from the rest of you” ultracompetence.

Honestly, the only one who comes out of this even remotely good is Doom, who isn’t great, but is the best version of him in any of the Marvel cartoons I’ve seen so far. He’s smart and arrogant and his schemes aren’t completely ridiculous and never involve appearing in front of the United nations (I’m looking at you, Spder Man With Or Without His Amazing Friends).

I don’t think there’s even a “so bad it’s good” episode to point people at. Time to move on to Iron Man: Armored Adventures.