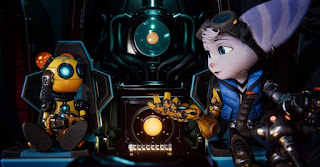 In 2003, Insomniac Games did something that would affect my gaming life for two decades.

I’d played and really liked the original Ratchet And Clank for PS2, but in 2003 they released the sequel, Going Commando. Going Commando introduced light RPG elements to the game series. Killing enemies earned you experience, experience earned you levels, levels earned you health. But most importantly, if you ran either a battle or a platforming section of the game and died, for whatever reason, the XP you earned was still earned when you popped back to your checkpoint.

To me, this meant every attempt I made at a section, successful or otherwise, resulted in progress. Incremental progress, but progress nonetheless. Suddenly, repeating sections didn’t feel frustrating or like a waste of my time. It was the last missing piece that made the Ratchet and Clank games one of my all time favorite series.

If you ignore the ill-fated attempts at online multiplayer in the PS2 era (shudder), I’ve played every single Ratchet and Clank release to the end, most of them at least twice through. It’s got platforming, which I love. It’s got low-stakes shooting with a lot of flash, which I love. It’s got solid stories and voice acting, which I love. If there’s a criticism to be had for the games, it’s that they’re consistently appealing, and rarely take risks beyond the standard formula, but I don’t want it to. It does the Ratchet and Clank thing, a thing I love, and every few years I get to do it again, and that’s perfect.

And this year I got to do it on the PS5, in one of the first games I’ve played this generation that really, truly feels like a new generation of gaming that couldn’t be done elsewhere. And that’s mostly the ray-tracing. Playing Rift Apart in one of its non-ray-tracing modes is, frankly, madness. No amount of resolution (a stat that’s tricky as hell at the best of times, between what the game is rendered at and what it’s upscaled to and how it’s upscaled and whatever) can make up for the incredible transparency, reflection, and shadow effects in the ray tracing mode. It’s jaw-dropping, and it takes the other next-gen features like texture quality, stuff on screen, draw distance, etcetera and gives them all an extra level op polish that’s like nothing I’ve ever played before.

The game itself is rock-solid Ratchet and Clank. Jumping, shooting, a story about friendship and forgiveness in a wacky cartoon space universe. Crazy weapons that are all still useful, smashing boxes to collect bolts, never quite as much ammo as you’d like. It’s Ratchet and Clank and also Rivet and Kit.

This game involves multiple dimensions, primarily as a way to show off the PS5 SSD’s insane ability to move data around. While dimensional shifting only comes into play in about 30% of the game, but when it happens, it happens so fast that it’ll take you a while to spot the tricks they use to make you think it’s instantaneous.

The fast load times also dramatically improve the backtracking part of Ratchet and Clank. Visiting previous planets to pick up the collectibles you missed along the way is so fast it removes most of the “feels like a chore” aspect of it.

It’s an incredibly pleasing experience from start to finish to obsessively grinding out all the weapons to their max Omega level during a second playthrough, an almost completely irrelevant experience that some of us are nonetheless compelled to do. If you’ve ever liked anything about Ratchet and Clank, this is the definitive one to play.