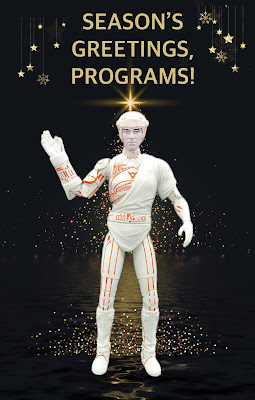 OK, this is mostly just a toy acquisition post, because Entertainment  Earth and Fedex did finally get me toe Dimond Select Tron 3-Pack I ordered the weekend after Thanksgiving. But also I thought of this and then I had to do it. “Hey”, I asked myself, “Does the iPad compositing software I use have tacky-as-fuck Christmas templates?” The answer, of course, was yes.

Flynn is red here bedcause the three pack comes with the Infiltrator Flynn repaint. I’m probably going to grab the traditional blue one because he’s available for super cheap also (these were on sale for half off) but I need to find one more thing to get free shipping. The rest of the set was, of course, Tron and Sark. 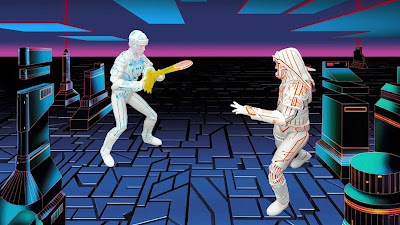 I take Hasbro’s engineering for granted. I buy a lot of Hasbro shit. They’re the vast majority of my purchases between Marvel, Power Rangers, Star Wars, and (soon) Indiana Jones. And
then I buy something not from Hasbro and their hands can’t hold their shit and the stand pegs are loose in the stand feet and there are joints massively hindered in movement by sculpt details and I realize just how on their game Hasbro is at crafting incredibly functional toys at this price point.
But these doo look great. They come with a lot of neat disc effects like the one I got Tron to hold for nearly 30 consecutive seconds, plus regular discs, plus bonus hands that also don’t hold anything.  A steal at the $10 per I paid but I’d be a little bit saltier if I’d paid the $20 full price.
Well, except for that Flynn gag at the top. To me, that’s priceless.