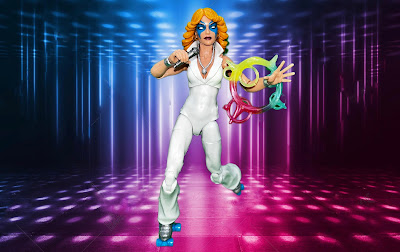 Remember how I saw Luis and realized I never had Luis and went on eBay and found a Luis for cheap and got a Luis (and a Ghost)? Well, Disco Dazzler!

Over the years, there have been a bunch of attempts to, shall we say, legitimize Dazzler. To take what was a ih“hey it’s 1980 and this disco craze shows no sign of dying out let’s make a disco superhero” hero and flesh her out and turn her into a more serious, believable, and real, character. That’s great!

But first there was the Dazzler who sang in a pantsuit on roller skates and that’s the only Dazzler I really give any kind of a shit about. Because comics are frequently weird and stupid and fun and this is the weird stupid fun Dazzler. So found one that was complete in the tray, no box, no build a figure piece, for a perfectly reasonable less-than-a-new-fig-shipped price, and now I have Dazzler.

It’s a 2016 figure, so it doesn’t have all the amenities of 2022 Hasbro, like the photo-real face painting or pinless joints or double jointed elbows, but she does have double knees and looks like Disco Dazzler, what else can you ask for?